On 26th July 2021, the Best of the Fest summer evening event was a dream-like showcase of film-making talent held under the watchful eye of the Udderbelly. The Earl’s Court Film Festival portrayed a rich medley of genres in a 75-minute showcase of their best short films. The Earl’s Court Film Festival claimed its place as a leader of the conversation stunningly combining international and locally made films, it brings together a charitable, community focused approach to cinema. This event is emblematic of an ongoing conversation between Earl’s Court and its film festival, bringing entertainment back into the heart of The Court.

The evocative dream sequences of films such as Gary Roberts’ “Memories Lost To Sleep” transported the audience’s understanding of their community. The ECFF reached its pinnacle with the gracious words of Diana Rigg (1938-2020). Rigg advocated on behalf of the wonderful and inspiring Earl’s Court Youth Club which like the film festival welcomes all genres, backgrounds and visions, they are both truly places of learning.

The event was capped off by a surprise award for the one of a kind, Corine Dhondee, winning The Earl’s Court Film Festival 2021 Women in Film award. Dhondee’s film essay was made in collaboration with Oscar-nominated cinematographer, Bradford Young. Young’s belief in the power of using cinema as a weapon is made consubstantial with his own creative milieu and portfolio by Dhondee’s ability to intertwine Young’s beautiful compositions with their interview. Young locates himself within a lineage of visual artists actively formulating a new black aesthetics, an intellectual creative community that he hopes to foster. Dhondee traverses this cinematic theoretical gap through a palette of creativity that is resonant with all of the night’s short bursts of spectacle.

The cultural tapestry that the organisers of this event have woven have allowed a disparate cultivation of talent that captures everything from the climate crisis to the Gloucester Road Golem. The next episode of the Film Festival will be coming soon, it is sure to be more of the same quality! 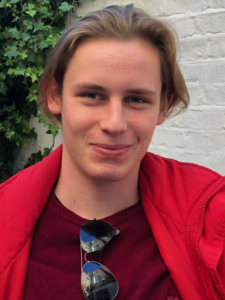 William Sinclair Tod is currently completing the third year of a BA English degree at The School of Oriental and African Studies and anticipates starting a Masters in English at the University of Venice in September 2022. Having travelled to over fifty countries in his lifetime, William brings a phantasmagorical collection of multicultural experience to his work. William brings his studies in contemporary African, South-East Asian, the Global South and Postcolonial Literatures to the fore in his contributions.