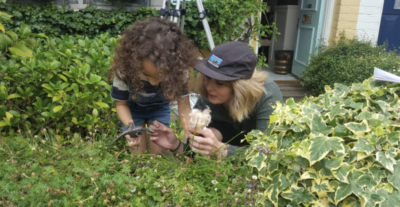 In advance of this year’s event, The Court caught up with its writer and director, Casey Hennessy, to find out how the festival helps emerging independent directors create something unique. Chosen as the best of five shorts co-produced in the Earl’s Court area, The Snail is a quirky glimpse into a child’s imagination with undertones of a global reckoning for humanity.

Quite what that reckoning is has been left entirely for the audience to decide – a combination of simple premise, seamless construction and limited dialogue make the film deliberately open handed. “All I wanted was for the viewer to be taken away from reality for a small moment in time,” says writer and director Casey Hennessy. “People have interpreted it in lots of different ways, but my initial idea was for it not to mean anything – nothing more than an expression of the power of imagination. I wanted the audience to take it where they wanted it to.”

The Snail is just one in a growing line of films made thanks to the work of local residents Sean Duffy and Caroline Tod Richardson, who since 2015 have developed a local infrastructure that helps new and emerging film-makers and screen writers with grants and logistical support. Films are shot in the Earl’s Court area during the spring and summer and are then shown and judged at the festival alongside a large and growing number of submissions from elsewhere in the UK.

“It is really refreshing to see a genuine passion for the community from the organisers,” says Hennessy. “A friend said to me that ECFF has grown to the point where it could charge submission fees, and I thought it was commendable that they don’t. When film-makers struggle to get these things made, the last thing they need is to pay money to show them. It is really encouraging for people trying to make it in the industry.” It also helps Earl’s Court continue to have an impact on the arts – and not only as a location. “The Snail was entirely shot in the area – on Child’s Walk. I had originally had a completely different idea for a location and was a little apprehensive. I wanted it to be on a council estate and that would have made it much darker. But Caroline gave me this compete curve ball and took me to see the sort of place where any tourist would snap a photo – and it made sense. It helped show things colourfully as children love to do and created a better juxtaposition to sweeten the blow.” Hennessy is an accomplished director of commercials in her waking life and says producing an independent piece has both pros and cons. “No one is commissioning you, so everybody you work with is running off your drive and passion. Everything, from the creative process to begging, borrowing and stealing to get it made is hard – but it is also a great thing. I wanted to make something I didn’t have anyone to answer to or solve a brief or put client logos on.” She is currently writing her next short. “I plan on making it longer than Snail – the standard ten to 15 minute length,” she says. “It’s about two best friends leading dead-end lives in the Midlands. They break into a supermarket and run riot. It’s a true story.” And advice for any would-be film-makers? “Don’t wait for other people to tell you what you can and can’t do. Just find a way to get it done.” See caseyhennessy.co.uk/portfolio-item/snailtrailer for a taste of things to come.