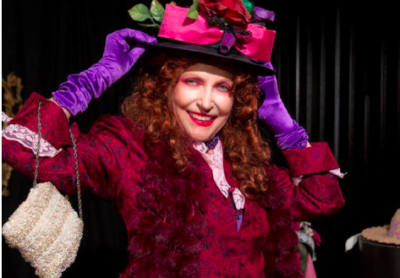 Jenny Runacre is instantly recognisable as an actress on English-language screen and stage, with a huge number of credits to her name. Immersed in fringe theatre in the 1970s, she also starred in radical expression of cinema, such as Pier Paola Pasolini’s Canterbury Tales, Robert Fuest’s Final Programme, Michelangelo Antonioni’s The Passenger, Ridley Scott’s The Duellists, and Derek Jarman’s Jubilee. Now predominantly an artist, but still living round the corner in Earl’s Court, her impact on how women were both played and portrayed at that time might now seem obvious. But does she see that herself?

Jenny: I don’t know if I’ve done that or not. But I know I was very much involved in and still am in experimental and – dare I say – avant garde work. I worked with people like Steven Berkoff and Ned Berman – we would start up all these little fringe theatres across Soho – basically somebody would find a basement place and then we’d all just play them. I was very much a proponent of being a woman living her life doing what she wanted. And I chose the parts I liked to play that were a bit like that. I suppose I have always stuck up for the roles that I wanted. I never did anything that was just ‘a female part’ and especially the sort of ‘girly female part’ was never what I wanted to do.

Brian: There was a huge amount of creative output in the ‘70s. Do you feel that today that level of creativity is still current? Jenny: I still get involved in hugely creative projects but the creativity that’s current is with people working outside the norms of the industry. I don’t think there’s much great, wonderful creativity going on in the established industry. But that was always the way. It was always the Mavericks working outside trying to do something new, trying to push things forward, to create something new.

Brian: Can you give me some examples of what you would regard as particularly interesting work at the moment?

Jenny: One of my daughters [Morgann Runacre-Temple] is doing dance-film, and it’s being choreographed in a very different way – incorporating narrative with it. You can see her films on Channel Four. I think it’s very original what she does. I’ve not seen dance and film incorporated in that way. And then there’s another young director called Paul Kindersley, and he’s working on the cross-dressing scene. He does these very, very interesting films with very deep messages. Then I think there is a lot of cross-media now that is working very well. It’s a much more fluid existence now. And of course, you’ve got this incredible access. Anybody can sit down and make a short film themselves because you can use your mobile phone. Paul Kindersley shot a very good film totally on mobile phones and you would not know it. The technical facilities are so much greater now that it does open it up to a lot of people.

Brian: The Earl’s Court Film Festival has been a success ever last couple of years…

Jenny: Yes, it’s brilliant. It really is so well organized and so egalitarian. I love it; I’m sure it’s going to take off in a big way you’ll find because it’s been so well received.

Brian: What do you think will happen relatively quickly after the pandemic is over?

Jenny: Well first of all, I don’t think the pandemic will be over too quickly. I think it’ll go in waves. I think it’ll go for at least another two years. I don’t see how you’re going to get people in theatres again. Unless they find a brilliant vaccine that everybody can have. So we’ve got to find a new way of living. Creativity will always come out. You will never repress that but new avenues have to be found. Theatre is the thing that will really take the knock.

Jenny: Films will go on. I can see something where you all get tested for a film. And then during making of that film, you would all be put in isolation. Then you get the film together. So there are possibilities. I suppose writing will come to the fore again, because that’s something we can all do. Podcasts. I mean, thank God we’ve got technology. It’s lovely to see the sky blue and hear the birds tweeting. We were going crazy. Our buildings are getting bigger everywhere you look. I mean, we’re pushing it extreme. So now we’ve been told to sit down and think about it all.

Brian: Could you tell us a little bit about the book you’re writing?

Jenny: Well, it’s about mainly how my career in the ‘70s in fringe theatre and films and how life for women in the industry has changed – some of the situations we got ourselves into, some of the parts we were asked to play, are now not viable. People wouldn’t do it. And just exactly how – when you look back at all those films – not all, but a lot of them – they were incredibly sexist. It wasn’t even sort of noticed. It was tlc… Here to help on the streets where you live We can help people in the local area with: Prescription pick up and drop off Grocery shopping and delivery …or anything else you can think of! Contact Toby at toby.brown@tlclondon.com or call 07736345776 just accepted. I’m linking it to the ‘metoo’ movement and how it is changing – or trying to change.

Brian: And do you have an end date?

Jenny: Well, I want to get it finished soon. And now I’ve got lockdown to really get down to it as there’s not quite so many distractions around. I would like it finished by October and in the hands of a publisher. I have a couple interested and I think October is quite an important date as there is an anniversary for Cassavetes coming out. Brian: Does it have a provisional title that people would look out for?