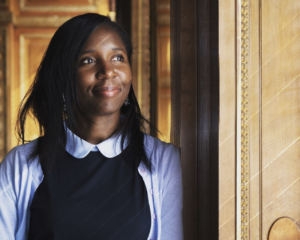 Christiana is an award-winning, NFTS trained drama director and have been selected for the BAFTA Elevate 2017 initiative to further female directors on to high end television and features. Her aim is to tell challenging stories, achieve nuanced performances and share her vision. She is a member of BAFTA, Directors UK, WFTV and Cinesisters.

She has recently directed episodes of Outlander, Vera, Grantchester, The Mallorca Files, Soon Gone: Windrush Monologues, Call the Midwife, Father Brown and Holby City. Over the last twenty years she has directed many hours of the highest rated drama series on British network television, including – Doctors, EastEnders, Hollyoaks and Emmerdale.

Creative England and the BFI funded her to direct short film, Some Sweet Oblivious Antidote starring amongst others, Sir Lenny Henry, Wunmi Mosaku, Colin Salmon, and Arinze Kene. The film was long listed for Best British Short for the 2018 BAFTA Awards.