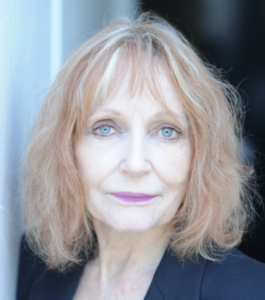 Jenny Runacre has worked extensively in film, TV and theatre working with among others,   John Cassavetes, – Husbands,  Pier Paolo Pasolini – Canterbury Tales,   Michelangelo Antonioni – The Passenger ,  Ridlley Scott – The Duellists, Derek Jarman – Jubilee in which she played the dual roles of Queen Elizabeth 1st and Bod, the leader of the girl anarchists, and Nicholas Roeg –  The Witches.

She has also frequently directed theatre productions and has taken several of them to the Edinburgh Festival.  She has also made short films herself.

Currently Associate Research Fellow at De Montfort University, Leicester, she has long been involved with the Portobello Film Festival and is looking forward to contributing in some way to this exciting  Earls Court Festival.