Earl’s Court Film Festival winner, Trace Taylor edits UK TV programmes for all of the major broadcast channels. She has also edited award-winning short films that have been screened, and won industry accolades, at many of the most respected film festivals worldwide.

From Sundance to BAFTA, she has experienced and participated at film festivals for over a decade. The Court speaks to Trace Taylor about her global successes and the importance of the Earl’s Court Film Festival. We hear why she believes that ECFF is the world’s most supportive and friendly film festival that she has encountered.

How did you hear about, and begin working with, the Earl’s Court Film Festival?

My first experience of the Earl’s Court Film Festival was in 2015. That year I edited Fellow Travellers – one of two winning short films. Around that time, myself, the Producer of Fellow Travellers and a Director we had collaborated with before had a great script which we recently adapted from DJ Connell’s short story ‘Kid Gloves’, so we decided to try to make the short film the following year. We applied for funding from ECFF and together we made last year’s winning short film. Kid Gloves has had an amazing response both in the UK and overseas. Without the Earl’s Court Film Festival our cinematic dream would have never become a reality and this special short film would have not reached out and entertained the global audiences that is has over the past 12 months.

Did you enjoy filming in Earl’s Court?

Any experiences you would like to share? The Earl’s Court Film Festival is totally unique. It feels personal and supportive, and the festival team really care about the work that we produce together. Most film festivals I attend are rather cold, systematic and commercial in nature. ECFF is different – it has heart and soul. Making a film for the Earl’s Court Film Festival feels like coming home. When you work crazy hours, produce take after take, the crew and actors tend to get grumpy, tired and disheartened. The creative moment can so easily be lost. However, what typically happens in Earl’s Court is that the enthusiasm of the festival directors and the neighbours help to keep our energy and creativity elevated.

I will never forget having a really tough day during the last filming session. We had camped out in Caroline’s (Caroline Tod-Richardson, Festival Co-Director) house for two days, and and, without fail, we were welcomed there every day with open arms. She fed and watered us – always with a smile. Where else would this happen? In an increasingly cynical and intolerant world, this kind of wholehearted hospitality and warmth is a complete rarity. Sean is also a really inspirational character. His upbeat insights and positive nature is like a breath of fresh air. It was a joy to welcome them on set.

The ECFF team is always there to help and offer an encouraging word. Time spent making films for the ECFF feels like being with family – we love it and highly recommend everyone to experience this at some point in their film making career

Your film, Kid Gloves, won best Earl’s Court Short in 2016. After the film’s inaugural screening, where has it appeared and which international awards has the film won?

Yes, this year I have edited a film called Pitfall. The film is set in Belorussia in 1943, this short film tells the story of German troops in retreat after the Kursk offensive and how partisan groups aimed to demoralise the retreating enemy and how amidst the horror and chaos of war, two enemies are forced into an unholy alliance in the battle for survival. Directed by Ben Desmond with cinematography by Kid Gloves Director of Photography, Tania Freimuth. Pitfall as already received critical acclaim from famed film critic, Mark Kermode, which is really encouraging. As well as being screened at ECFF 2017, the short film will also be screened at the Isle of Man Film Festival in September. 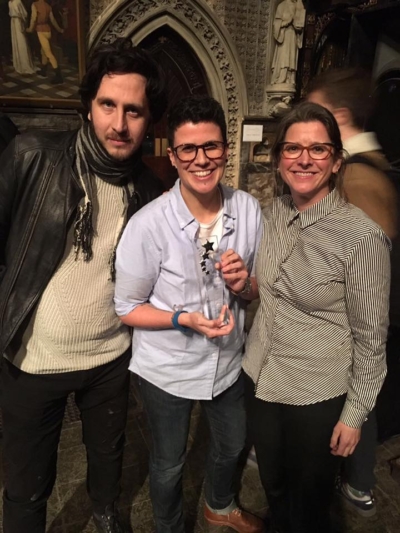