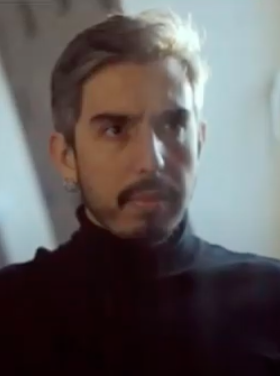 Caio Cortonesi was an accomplished music and film director and producer in his native Brazil. Then he packed a laptop and some clothes into a bag and flew to London. Brian Scudder finds out why – and asks him about his new future, and the part being played in it by the Earl’s Court Film Festival.

Brian: Can you tell me a little bit about yourself and your film, Asra, that won the Earl’s Court Film Festival last year?

Caio: My name is Caio Cortonesi. I am a filmmaker and music producer. I have just recently relocated to London. I’m Brazilian and I’ve been working mostly as a freelancer. But my personal artistic work is usually shared between music and film.

Brian: When did you come over from Brazil?

Caio: In August 2018. So I haven’t been here for two years yet. Last year wasn’t the most productive in my life because I just moved here with a laptop and a bag of clothes.

Brian: How did you get involved with the Film Festival?

Caio: I just sent my film, Asra. I think a friend who had been in a previous edition mentioned it and I found the website. Because I’m new here I was trying to get to know as many festivals as possible. And because I’m not financially very stable I tried to only send to festivals where you don’t have to pay fees or at least very low fees. I just basically sent my film and was very happy to be chosen. It was an amazing experience.

Brian: When did you make Asra?

Caio: I shot it in early 2018 in Brazil. It was basically a frustration project because initially I was trying to make a feature back in Brazil in 2017. Actually, I set myself a little challenge. I wanted to try to make a feature in one year, from start to writing the script, all the way to finishing it.

Caio: I wrote a script that I was very happy with, I got an amazing cast. I had the locations, everything. But I couldn’t finance it. It had basically dried up. There was no financing for film in Brazil whatsoever.

Brian: Is that symptomatic of the Bolsonaro Government?

Caio: It is very much symptomatic. The Government was elected on a whole platform that treats artists like criminals. Like cinema in most countries in the world, it’s heavily supported by the government. You need to have subsidies otherwise the industry doesn’t exist. But there were scandals in Brazil relating to that: a lot of world-famous arts – already really wealthy – getting gigantic grants for doing silly things. There was this scandalous aspect to it.

Caio: The current populist government uses that as another little populist flag and for the past year or so there has been basically no film production as a result. It’s really depressing. They used a couple of scandalous examples to dismiss every single artistic endeavour as being as a way of trying to steal money from the people. You know the kind of rhetoric…

Brian: So it must have been a bit of a relief to come over here and actually get some work done.

Caio: Asra came from that frustration because I had a little bit of money that I could not use to make the feature with. So I wrote a short film with a story that’s a kind of prequel. It relates to the feature – a lot of the characters in the short film are characters in the feature. I just wanted to explore their backstories a little bit. And I made Asra as a way to do something with that idea. But I realized that the climate was getting worse and worse and I came here – very hopeful; very optimistic.

Brian: How has success at the Earls’ Court Film Festival had an impact?

Caio: It’s had a huge impact. Especially now, because I came here with nothing and left my whole life behind. I felt psychologically very disconnected. It’s hard. You really start to question your own skills. When I got my film selected for festivals here, and winning best film at Earl’s Court, it gave me such excitement to be here and think ‘maybe things will work out in the end’.

Brian: Thinking about the film first and then perhaps what you’re going to hopefully go on to do – you were saying you had a script for a feature and you wanted to explore some of the backstory. What elements did you particularly pick up on?

Caio: In the feature that I was trying to work on, the character Omar makes  references quite often to his father. And the lead character of the feature is the psychologist that also appears in Asra. I wanted to do something in the same universe and explore the backstory of that specific character. I was also inspired by an article I had read in The New Yorker magazine and had this idea that Asra is a Muslim and raised in a very traditional family. I was thinking, what could have broken his relationship with his dad so much? Because he doesn’t see himself as a very traditional person. He has always struggled with religion. But at the same time he felt in the feature he owes it to his father to try to be the good religious person that his father would have expected him to be. And that is where Asra came from.

Brian: Looking forward you said that the Earl’s Court Film Festival had a dramatic impact. It is a very difficult time for everybody right now but can you see some light at the end of the tunnel?

Caio: Definitely. Receiving that level of recognition from the jury was amazing. It gave me so much optimism about the whole experience of moving country and trying to rebuild a career from scratch. Personally, Caroline has been so supportive and so kind to me. We were actually working together on another short film for this year’s Festival but then because of the lockdown we had to put everything on hold.

Brian: What is that?

Caio: It’s a very different film to Asra. I wrote it initially to be like a web series – five short episodes of three or four minutes each. But then Caroline  proposed acting as an executive producer and shooting it in Earl’s Court and making it an Earls’ Court film.

Caio: It’s a bit sci-fi. It’s a meditation on our anxieties of living under the surveillance of all the gadgets that surround us, the kind of feeling that we are always being watched – which now is an even bigger concern with coronavirus. Several governments have tried to implement contact tracing technologies, which is a big privacy concern. It is a bit of a meditation on that.

Brian: Do you have any other projects in the works?

Caio: Tragic as it is, lockdown has been pretty productive for me because there were lots of things I wanted to do that I couldn’t find the time to do. I’ve just recorded a new album. And a music video that I shot here in my living room. It’s going to be released on the 25th of May.

Caio: I’m also working right now trying to get the feature done. I hope as soon as the lockdown subsides to start get the funding for the feature film.

Brian: In Brazil or here?

Caio: Here. It’s the film I wanted to do in 2017. I translated the script because it was in Portuguese. And now I’m trying to get it done here as a film. I also have two feature scripts that are pretty much finished that I want to do in the future as well.

Caio: And right now, I’m writing a play that I’m also very excited about doing here as soon as the lockdown has subsided. So I have lots of little projects that I’m working on all the time. They’ll get going as soon as the whole situation gets a bit less, less quarantiny.

Brian: I suppose the thing that’s closest to completion for you is your album – name, title, style, where we get it?

Caio: I’m releasing the single on the 25th of May and the album will probably be released in July. It’s a bit of a mixture of the things that I’ve done in the past because as a hard rock music producer I have worked with lots and lots of artists. My previous solo record was more world music.

Brian: Where would people go to find this? Is there a way of following you to get information?

Caio: People can find me on Facebook or type in ‘Ifall’ on Spotify. You can also just look out for my name Caio Cortonesi on social media.